Introduction to MELP and MELPe Vocoder

Mixed-excitation linear prediction (MELP) is a United States Department of Defense (US DoD) speech coding standard used mainly in military applications and satellite communications, secure voice, and secure radio devices. Its standardization and later development was led and supported by NSA, and NATO.

The Tactical Secure Voice Cryptographic Interoperability Specification (TSVCIS) is variable data rate system that is based on a MELPe STANAG-4591, which operates at 2400, 1200 or 600 bit/s, and offers also scalability to enhanced coding at higher rates such as at 8000, 12000 and 16000 bit/s.

In 2009, the TSVCIS was created by National Security Agency (NSA) and Naval Research Laboratory (NRL), based on STANAG4591 MELPe. [7]  It includes the following two main voice categories:

Both categories may have different modes including Forward Error Correction (FEC) using different blocks of BCH (Bose-Chaudhuri-Hocquenghem). The FEC protection gives a tremendous advantage in highly degraded channels so that speech intelligibility will be maintained even at very high rates of channel bit errors.

One of the goals in implementing the TSVCIS was to improve voice quality as compared to existing equipment. A key aspect of overall vocoder performance is how well a vocoder performs in two common military environments: a) harsh acoustic platform noise and b) harsh RF channel noise (bit errors). [8]

For the 2400 bit/s NB voice mode, MELPe is the DoD and NATO standard. It was designed to provide good performance overall in tactical environments and has been tested extensively as part of the standardization process.

The goals for the WB voice modes, besides improving voice quality, were to provide multiple voice rates that can be matched to varying channel conditions while still maintaining direct interoperability with the other voice modes, both wideband (WB) and narrowband (NB).

These goals were met with four WB voice modes that are all supersets of the MELPe 2400 bit/s mode. There is an 8000 bit/s mode, a 12,000 bit/s mode, and two modes at 16,000 bit/s. The rates of these modes were selected to conform to the voice data rates of existing radio equipment. The modes themselves were defined to accommodate the expected range of acoustic and channel noise condition.

The 8000 bit/s and 12,000 bit/s modes are both super-protected MELPe frames. They both have Forward Error Correction (FEC) layered on the NB bitstream to strongly protect it from channel noise and so provide higher voice quality over longer transmission distances.

Finally, the second 16000 bit/s mode contains no FEC but even more voice information. This mode is designed to provide high voice quality when the channel has low bit errors or FEC is provided out of band.

The TSVCIS VDR encoder is illustrated below.  Using the input speech and the selected mode, the STANAG-4591 MELPe vocoder can be used along with the NRL Variable Data Rate (VDR) encoder to encode Wideband Waveforms frames at rates 8000, 12000, and 16000 bit/s. [7]  Based on the selected TSVCIS VDR operation mode and input speech frames input from the MELPe encoder, the VDR encoder generates and encodes residual spectral codes parameters into additional bits that, along with the standard 2400 bit/s STANAG-4591 bits, are used to generate the Wideband Waveform frames at 8000, 12000, and 16000 bit/s. 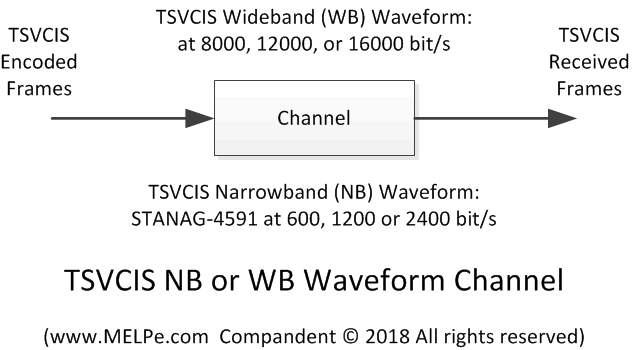 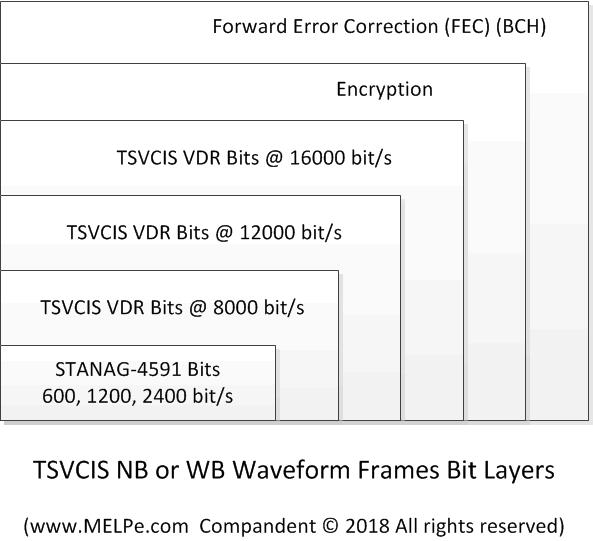 Similarly, when modem is used, Compandent's FLEXI-232 DTE may be used along with some additional processing to form a TSVCIS vocoder, as illustrated below.

FIND OUT MORE ABOUT MELPE SOFTWARE