Introduction to MELP and MELPe Vocoder

Mixed-excitation linear prediction (MELP) is a United States Department of Defense (US DoD) and NATO speech coding standard used mainly in military applications and satellite communications, secure voice, and secure radio devices. Its standardization and later development was led and supported by NSA, and NATO.

History of MELP and MELPe Vocoders

MELPe achived better quality than the first five candidates, and thank to its lower complexity than the WI coder, the MELP vocoder won the DoD competition and was selected for MIL-STD-3005. [4]

Between 1998 and 2001, a new MELP-based vocoder was created at half the rate (i.e. 1200 bit/s) and substantial enhancements were added to the MIL-STD-3005 by SignalCom (later acquired by Microsoft), AT&T Corporation, and Compandent which included:

This fairly significant development was aimed to create a new coder at half the rate and have it interoperable with the old MELP standard. This enhanced-MELP (also known as MELPe) was adopted as the new MIL-STD-3005 in 2001 in form of annexes and supplements made to the original MIL-STD-3005, enabling the same quality as the old 2400 bit/s MELP's at half the rate. One of the greatest advantages of the new 2400 bit/s MELPe is that it shares the same bit format as MELP, and hence can interoperate with legacy MELP systems, but would deliver better quality at both ends. MELPe provides much better quality than all older military standards, especially in noisy environments such as battlefield and vehicles and aircraft.

In 2002, following extensive competition and testing, the 2400 and 1200 bit/s US DoD MELPe was adopted also as NATO standard, known as STANAG-4591.[5] The NATO testing performance measurements included voice intelligibility, voice quality, speaker recognition, language dependency, speaker dependency, 10 acoustic noise environments, transmission channel under 1% BER, tandem using 16 kbps CVSD vocoder, whispered speech, and real-time implementation. The testing data included Over 36,000 files, or 500 hours of speech under various conditions and languages. As part of NATO testing for new NATO standard, MELPe was tested against other candidates such as France's HSX (Harmonic Stochastic eXcitation) and Turkey's SB-LPC (Split-Band Linear Predictive Coding), as well as the old secure voice standards such as FS1015 LPC-10e (2.4 kbit/s), FS1016 CELP (4.8 kbit/s) and CVSD (16 kbit/s). Subsequently, the MELPe won also the NATO competition, surpassing the quality of all other candidates as well as the quality of all old secure voice standards (CVSD, CELP and LPC-10e). The NATO competition concluded that MELPe substantially improved performance (in terms of speech quality, intelligibility, and noise immunity), while reducing throughput requirements. The NATO testing also included interoperability tests, used over 200 hours of speech data, and was conducted by 3 test laboratories worldwide. Compandent Inc, as a part of MELPe-based projects performed for NSA and NATO, provided NSA and NATO with special test-bed platform known as MELCODER device that provided the golden reference for real-time implementation of MELPe. The low-cost FLEXI-232 Data Terminal Equipment (DTE) made by Compandent, which are based on the MELCODER golden reference, are very popular and widely used for evaluating and testing MELPe in real-time, various channels & networks, and field conditions.

The STANAG-4591 MELPe vocoder was tested along with other codecs in several acoustic noise environments, under 1% Bit Error Rate (BER), and CVSD-codec tandem. The Mean Opinion Score (MOS) subjective test results are summarized in the table below.

The NATO STANAG-4591 MELPe competition's combined performance index is illustrated in the figure below. 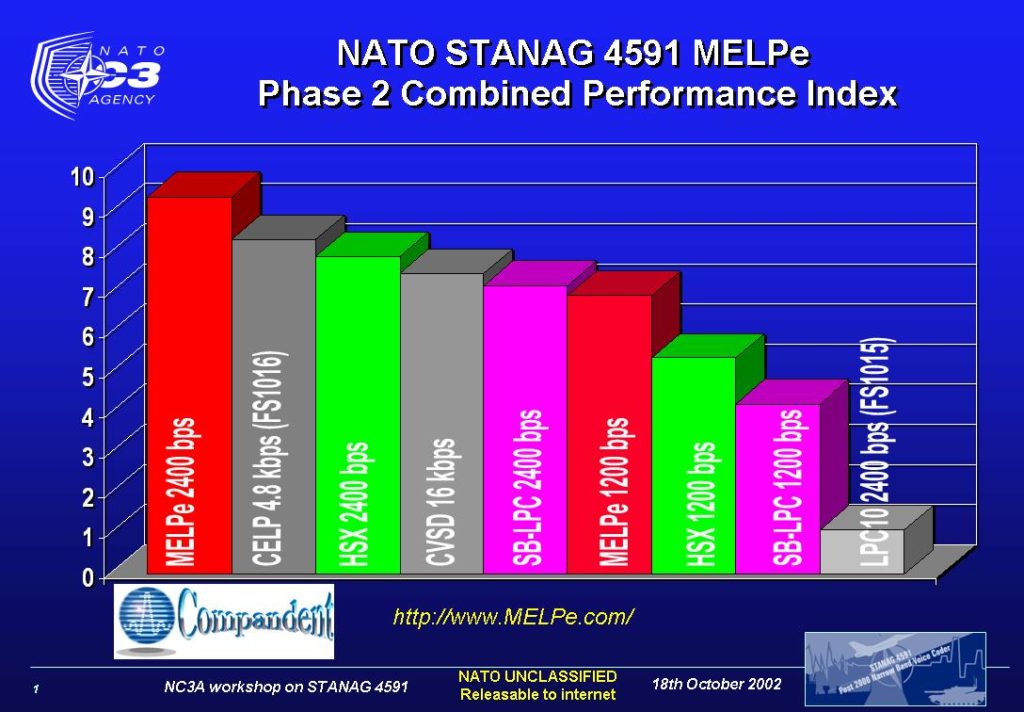 In 2010, MIT Lincoln Labs., Compandent, BBN, and General Dynamics also developed for DARPA a 300 bit/s MELP device .[7] Its quality is better than the 600 bit/s MELPe, but its algorthmic delay is longer.

The MELPe has been implemented in many applications including secure radio devices, satellite communications, VoIP, and cellphone applications. In such applications, additional expertise is required for combating channel errors, packet loss, and synchronization loss. Such expertise requires the understanding of the MELPe's bits sensitivity to errors. The 2400 bit/s and 1200 bit/s MELPe include synchronization bit, which is useful in serial communications.

About the MELPe Vocoder  Algorithm

The mixed excitation is implemented using a multi-band mixing model. This model can simulate frequency dependent voicing strength using an adaptive filtering structure implemented with a fixed filter bank. The primary effect of this mixed excitation is to reduce the buzz usually associated with LPC vocoders, especially in broadband acoustic noise.

When the input speech is voiced, the MELP coder can synthesize using either periodic or aperiodic pulses. Aperiodic pulses are used most often during transition regions between voiced and unvoiced segments of the speech signal. This feature enables the decoder to reproduce erratic glottal pulses without introducing tonal sounds. 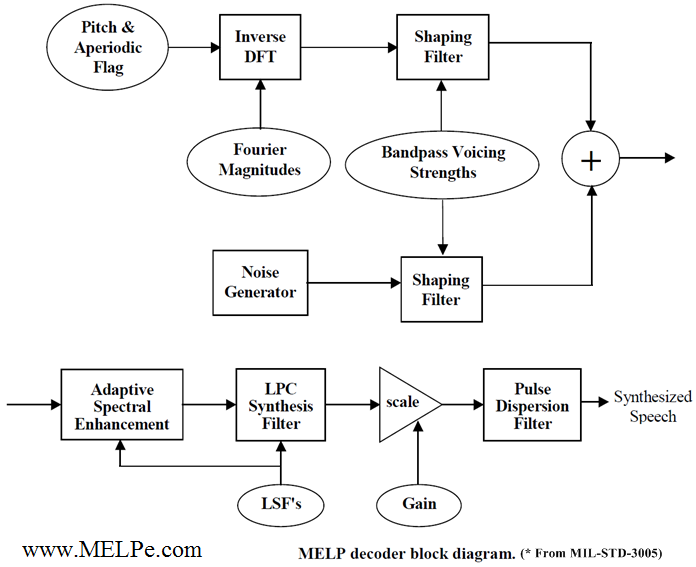 The recommended analog requirements for the MELP coder are for a nominal bandwidth ranging from 100 Hz to 3800 Hz. Although the MELP coder will operate with a more band limited signal, performance degradation will result. To ensure proper operation of the MELP coder, the A-D conversion process should produce peak values of (or near) -32768 and 32767 (16-bit signed samples). Additionally, the coder should have unity gain, which means that the output speech level should match that of the input speech.

The MELP parameters which are quantized and transmitted are the final pitch; the bandpass voicing strengths; the two gain values; the linear prediction coefficients; the Fourier magnitudes; and the aperiodic flag. The use of the specified quantization procedures is required for interoperability among various implementations.

The Enhanced Mixed Excitation Linear Prediction coder is MELPe block diagram is illustrated shown below. Substantial enhancements were added to the MIL-STD-3005 by SignalCom (later acquired by Microsoft), AT&T Corporation, and Compandent which included:

The STANAG-4591 MELPe vocoder encoding operation is performed as follows.

That is illustrated in the figure below (from the STANAG-4591 standard) and summarized in the table below.

Table 2. MELPe vocoder's frame sizes and the number of bits per frame for the three rates

In 2006, the Secure SCIP is a multinational communications standard for application layer protocol developed by the National Security Agency (NSA) to enable interoperable secure communications among allies and partners around the globe. [8] The SCIP-210 Signaling Plan is the specification that defines the application layer signaling used to negotiate a secure end-to-end session between two communication devices, independent of network transport. The SCIP supported channels include digital cellular systems such as GSM and CDMA, digital mobile satellite systems, and a variety of other narrowband digital systems.  Its Secure and Clear MELPe Voice applications use MELPe codec, G729D, Voice Activity Detection based Discontinuous Voice (DTX Voice), and Comfort Noise, both are implemented similarly to the GSM standard. Compandent's MELPe software under Android was used and tested by NATO also as part of the development of SCIP.

Tactical Secure Voice Cryptographic Interoperability Specification (TSVCIS) is variable data rate system that is based on a MELPe STANAG-4591, and offers also scalability to enhanced coding at higher rates such as at 8000, 12000 and 16000 bit/s.

In 2009, the TSVCIS was created by National Security Agency (NSA) and Naval Research Laboratory (NRL). [9]  It includes the following two main voice categories:

Both categories may have different modes including Forward Error Correction (FEC) using different blocks of BCH (Bose-Chaudhuri-Hocquenghem). The FEC protection gives a tremendous advantage in highly degraded channels so that speech intelligibility will be maintained even at very high rates of channel bit errors.

Find out more in MELP FAQ

find out more about MELPe software.

find out more about MELPe hardware.